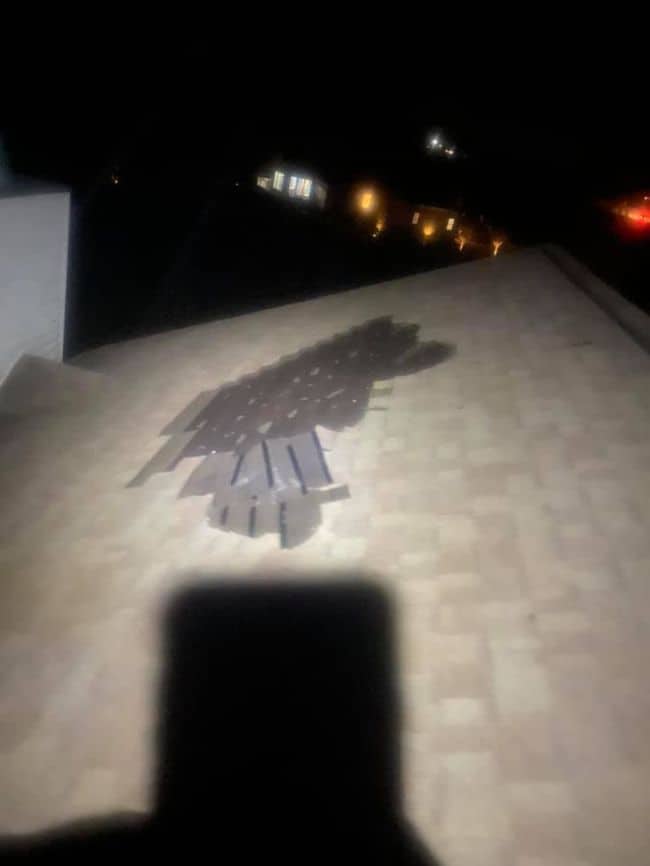 Here is a great example of the damage severe wind storms can cause to your homes roof. These storm damaged roofs in Ashland County got hammered for a full day with high winds causing extensive roof damage across the region.

We were called out to do emergency roofers repairs and emergency tarping to quite a few areas. In a situation like this one pictured, we were able to respond quickly (that very evening). Each of the calls we received that day were from homeowners who had noticed shingles in their yards. Over the next week we were able to respond to many roof repair calls to our office with similar roof damage. Most importantly, many of the roof inspections we were called out for qualified for new roof replacements paid for by insurance.

We identified and confirmed that there was severe storm damage to these roofs. Upon arriving to most roofing repair calls, we not only confirmed and documented that there were downed shingles in the homeowners yards, but also that there were massive sections of missing shingles on their roofs! Most of these patches were very large in size and located on numerous areas of their roofs.

Many of the homeowners were very surprised when they realized the extensive damage caused to their roof from one wind storm. Also, the sheer size of the sections of missing shingles was mind-blowing in a few cases. Some of these homes even had entire sections of their vinyl siding torn off by the high winds.

After identifying and documenting the damage with the homeowner, our trained roofers did what they do best and got to work. Our roofers went back onto the roof and cover each section of the roof with emergency tarps. (Our emergency tarping services are done as soon as possible to prevent any additional damage to the home.)

Protection from the harsh elements is hugely important. For any roofers, preventing additional damage to the sheathing on your roof and to the interior of your home should be a priority. This is also important for insurance claim reasons. Homeowners need to take the necessary steps to prevent further water damage once they realize they have storm damage to their roof.

[When Do You Need New Roof Sheathing?]

After emergency tarping this particular roof, we then proceed with the process of putting together their estimate so they could process their insurance claim. This customers claim was approved very quickly and we coached them on each step in the claim process about what to expect. Their home is now on the fast track to being restored to its proper condition and it will be paid for by their insurance.

Absolute Assurance Restorations does roofers repair in Mansfield and Ashland regions. Our top rated storm damage restoration process is second to none and these services are available to all customers in these regions. We do all types of roofs including shingles, slate roofing, metal roofing, rubber and flat roofs. In addition, we also do vinyl siding, skylights, windows and gutters. We install all roofs in accordance with the ORC. Contact us for a free estimate (419) 709-7223.