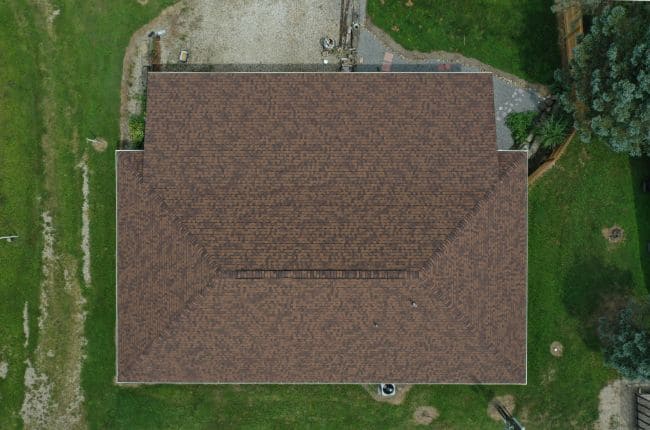 When we take on different roofing projects we make absolutely certain we give it our full attention. This concept seems obvious and like it should be the basic operating principle for all roofers. Remarkably, many roofers don’t follow that simple common sense concept.

That’s why at Absolute Assurance Restorations we follow a process for roof inspections. Certainly, we follow our in-house storm damage inspection process on each roof. This is a process we developed over the years that has helped hundreds of homeowners qualify for free roofs (paid for by insurance). Indeed, when we inspect your roof we don’t cut any corners. Therefore, on every roof we inspect we are on the lookout for possible storm damage. 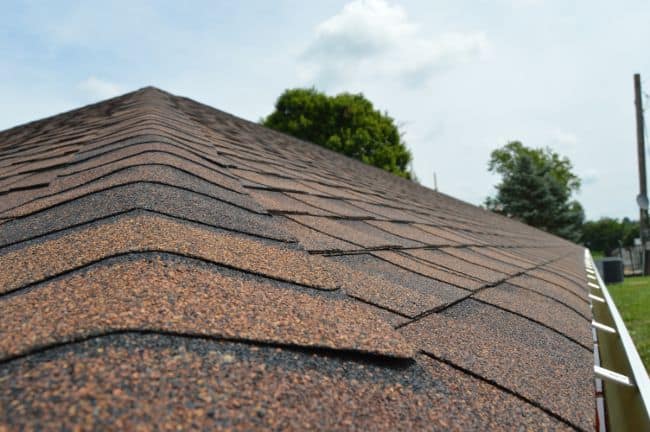 This is especially true when homeowners call about roof leaks. Oftentimes, they aren’t keeping track of when storms came through their area, especially if they don’t notice the leak right away. Sometimes it just sneaks up on you.

For instance, a recent customer called us about a roof leak and we scheduled the inspection at her earliest possible convenience. On the phone she described symptoms of water leaking that we were very familiar with based on our experience. Of course, she believed it would be a typical roof repair for the leak. However, our roofer found where the leaks were originating and not shockingly to us, lots of storm damage. In addition, we discovered sheathing damage underneath the shingles and made sure it was documented thoroughly. He documented the damage and provided her with the photographs and necessary information and she filed a claim.

We walked her through the process and within days, the adjuster approved the claim and we scheduled her new roof replacement. The rest is history. She received a brand new roof because of severe storm damage and it was covered by her insurance.

We are top rated roofers in Mansfield, Ohio. Absolute Assurance Restorations provides services for all types of roofs including, shingles, metal roofing, slate roofing, rubber roofing and flat roofing. Also, we are one of the top rated vinyl siding companies in the region. In addition, we can repair or replace your skylights, windows and gutters. Contact us for a free roofing inspection. (419) 709-7223 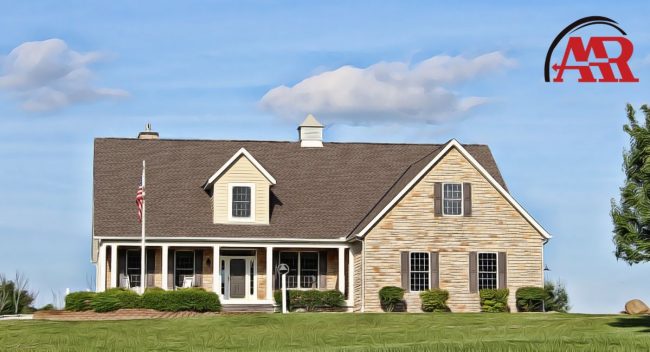 Yesterday at the daily health conference the state of Ohio was moved from a “stay at home advisory” to a “stay at home order.” In other words, we are ordered to stay at home and practice social distancing. These measures are being taken to prevent community spread. But can you leave your home?

The Stay at Home order requires people to remain in their homes unless they have
an essential job or are doing an essential task like going to the grocery store or walking a pet. 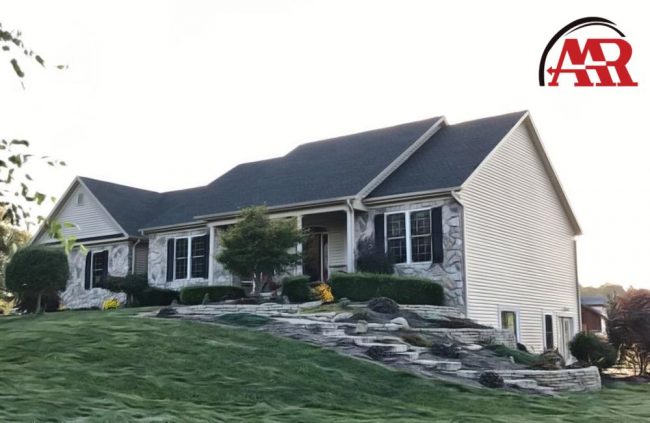 Included in the essential businesses category are grocery stores, pharmacies, clinics, police and fire, gas stations, garbage and sanitation, hospitals and clinics, and essential contractor services. As one of the top rated roofing contractors near Mansfield, Ohio, we are included in the essential businesses and services list. We will continue to operate and provide our customers with essential roofing services during these times of uncertainty. Your home needs to be protected in the event you have storm, wind and hail damage and you need a roof repair or replacement.

We are in full business operation mode. Most importantly, we will be practicing all required health department safety standards to protect you and your family. We will not be shaking hands when we arrive to do a free estimate of your roof damage. Our roofers will practice social distancing of at least six feet to protect vulnerable individuals. Also, our roofers use hand sanitizer and wear gloves to avoid contamination of any surfaces. All of these measures are done as basic safety precautions for all individuals.

We will continue to provide roofing services in Richland County, Crawford County, Ashland County, Knox County, Licking County, Delaware County and Franklin County. As always, our workmanship guarantee is provided to our customers for all roof repairs and roof replacements.

Absolute Assurance Restorations is the leading storm and wind damage restoration company in the entire region. Contact us for any storm and wind damage roof repairs as well as skylights and windows. Also, we are still providing free estimates for any new roofing projects you may have. In addition, we are the top rated siding company near Mansfield, Ohio. Call for a free estimate (419) 709-7223. 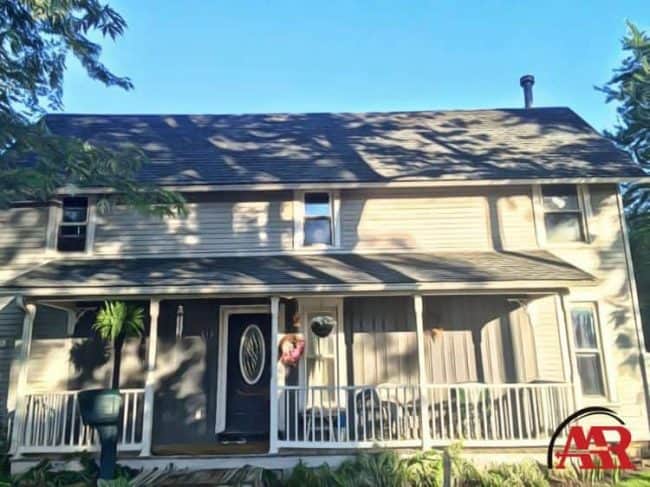 Absolute Assurance Restorations is a top roofing contractor near Mansfield Lahm Regional Airport, Mansfield, Ohio. We were contacted recently by a customer and this customer’s name was Michael. Unfortunately, Michael discovered water damage occurring due to an exterior roof leak. Because of the requirements of his homeowner’s insurance policy he needed to limit the damage as soon as possible. As a result he inspected his roof from the ground once the weather cleared. He didn’t recognize any damage from the ground. No missing shingles and he couldn’t quite tell if there were lifted up shingles on his roof. Almost certainly he figured he had wind damage from the night before, he could hear the wind howl from indoors.

Michael was certain that the interior water damage was caused by wind damage to his roof, but he was uncertain as to the extent of the damage. He knew he needed to take action immediately to avoid additional damage on the interior of his home and his attic. Michael did a search for the top roofing contractor roofing contractor near Mansfield Lahm Regional Airport, Mansfield, Ohio, where his home was located. He contacted us, Absolute Assurance Restorations, for the reason that so many other customers do, we are the top rated roofing contractor in the region. We responded immediately to his call.

We did a Free Roof Estimate

Firstly, when we arrived, we immediately performed a thorough roof inspection. Next, we discussed with Michael the type of roof damage that we found and provided him with a free written estimate. Almost all of the damage was caused on the front side of his home. His home had lifted up shingles and nail pops scattered across an entire section of his roof. Fortunately, the sheathing wood beneath the roof was sturdy and would not need to be replaced. We provided Michael with everything he needed due to the fact that he wanted to contact his homeowner’s insurance company about a claim. Lastly, we tarped the front side of his to prevent any additional rain damage that could occur.

A few days later Michael requested that we meet with him. When we arrived we had a detailed discussion about his best options. Michael wanted us to replace his roof and restore his interior home. His insurance company said they would cover the damage and agreed to honor our detailed and thorough estimate. Also, Michael was excited that this included all of the interior ceiling damage.

We Scheduled a Roof Replacement

Next, Michael scheduled the best time for him to have us repair his roof. We worked out the details with him and ordered the materials. Once we got the final approval, we got to work and did a complete roof replacement. We tore off the old, installed the new roof, and we repaired the interior ceiling damage in one day. 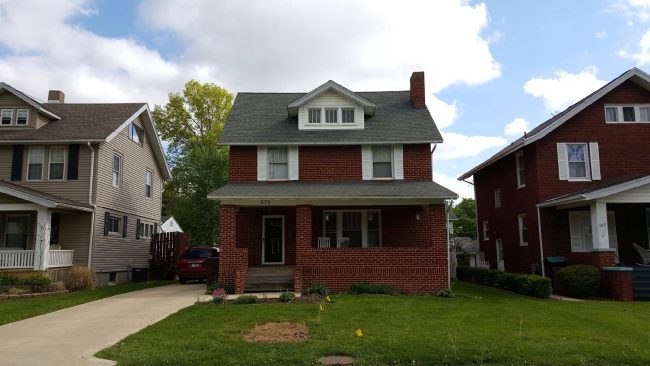 It is one of the more frustrating things any homeowner can experience, roof leaks and missing shingles. After a wind storm you go out side and you realize your roof is missing shingles, what do you do? Aside from feeling frustrated, you realize you need to fix that immediately. What happens if you don’t fix it right away? The next time it rains, water will come inside your home from those exposed areas and start wreaking all types of havoc. 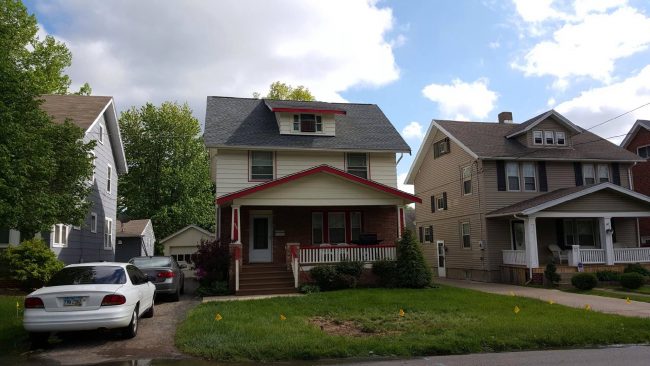 As a roofing company we encounter all sorts of roof leaks that require a roof repair near Mansfield, Ohio. Whenever there is a wind storm, many homeowners contact us because their roofs have been damaged by the high winds causing shingle blow off or shingle nail pops. A shingle nail pop means that the nail has went through the shingle. In other words, the shingle is damaged and a prime area for roof leaks.

Some homeowners may attempt to repair missing shingles and nail pops on their roof, it just depends on the pitch of their roof and whether or not they feel comfortable going up on a roof, especially in the winter. However, it seems that most homeowners don’t feel comfortable repairing their own roof and prefer to contact a qualified roofing contractor (like us) to repair their roof. Most roof repairs to your home will cost between $300 and $1,000, depending on how extensive the damage is.

In addition to roof leaks from the obvious shingle blow offs and shingle nail pops, leaks can also be caused by compromised flashing around the vulnerable parts of your roof. Roof flashing is thin metal sheeting used around any vulnerable area of your roof to prevent leaks. Over time the seals around your flashing can wear out because of the harsh weather they normally protect you from.

Oftentimes less-experienced or shoddy roofers put the roof flashing in, but they fail to seal it correctly. This can cause serious problems by way of leaks into your home. This sort of leak can be very troublesome for you, especially if you cannot spot it right away. A lot of interior damage can occur in a very short amount of time from intrusive water entering your home. You may have flashing around your chimney, skylights, valleys and slopes.

If you are in need of professional roofing services for any roof leaks or missing shingles , contact Absolute Assurance Restorations in  Mansfield, Ohio. We service the entire Central Ohio region. Also, we do full roof replacements caused by old age and storm damage. We replace storm damaged roofs with insurance claims as well. In addition, we do siding installation in Mansfield, skylight dome replacement, slate roof repair, and metal roof repair.